After sending a message to Nerm online, I headed down to XOYO to the night. Engine-EarZ, Driving Lolita, Shaa’ir +Func were playing alongside Vivek, Nasha Experience, Bambooclart. Bobby Friction and Orifice Vulgatron (Foreign Beggars) presented the night with a massive reception from the crowd. It was part of the BEast festival between XOYO and CM Sounds (Community Music) that included a week of seminars at the venue with several live nights.

After catching Riz quickly, a militant sweep of vibeful garage just immersed itself into the front space. The security dudes thought I was part of the crew and offered to let me through… Oldskool garage and bass music filtered through with the likes of Ramsey & Fen, Dubaholics’, Doolally, wittyboi, Jaheim and more massive tunes.

Nerm swifted through the crowd, recognised me and ended up chilling with the crowd for the main event; personal relatives, mates and more. It was great talking to the family, friends including the guitarist of Driving Lolita and Bambooclart. D-Code briefly came through and spoke to all of us before heading out again. His height reminded me of the D&B Arena interview he had with Nerm describing him as having a large alien head. It was great talking to Dee and I felt humbled at his genuine welcome. I grew up since the age of 16 listening to Electro East, Nerms show on the BBC Asian Network and the Shiva Soundsystem mixes on radio 1’s In new DJ’s we trust so it was a moment to remember.

Shaa’ir + Func were the first band up with deep asian influences on an electro spin, soulful lyrics over shuddering bass. The music was insanely great; one of their mates in the crowd passing over a sticker immediately. The band is Monica and Randolph, playing a mix of smooth vocals over experimental electro and guitar vibes with Indian/ Asian influences. I didn’t know about them before the night but the music was great without a doubt: http://www.shaairandfunc.com

All the acts blended inwith one another seemlessly. Riz MC delivered snappy intellectual lines over punchy beats and bass. The highlight for me was his performance of Hundreds and Thousands with a mixture of oldskool drum & bass after a lyrical recital of Sour Times a psychologocal take on the perception of Muslims who are driven to commit terrorist acts. The two DJ mix competition winners played their set with a tracklist of syncopated dark grooves and all sorts of vibes ensued among the crowd. http://www.rizmc.com

Foreign Beggars At Electric Brixton on the 10th December 2011

Tribe presents Never Say Die vs Circus records @Electric Brixton, Saturday 10th December 2011
I went to interview the Foreign Beggars before their set at Electric Brixton at 2am on the 10th December. They arrived quite just before 2 so there wasn’t enough time but they gave out a massive performance with a militant set regardless. I remember distinctly chilling to some Caspa,  and Engine-EarZ with my mate Luke before we headed out. Other acts on the night included Flux Pavilion, Skism, Funtcase, Zomboy and many others.
Luke and I headed out soon afterwards reaching the place for the first set played out by Mobscene, their set including a massive list of tracks, heavy rhythms and surprisingly soft on the ears Lol. Sometimes sound systems have alot of treble so it might hurt the ears for a while. Bass Cannon dropped several times during the night right till 6am, with the consistent reaction every time; ultimate awe at the militant vibe and bass.
The Foreign Beggars smashed their set performing ‘Shellshock’, ‘no holds Barred’, ‘Lines In wax’, “Solace One”, “Jump Back” with Orifice Vulgatron and Metropolis delivering snappy, rhythmic and punchy vocals over every vibe that presented itself. DJ Nonames stood behind the two doing what he does best, cutting up and spinnin’ in a hard edge fashion, between the tracks, scratching several times in the set.
The MC that performed with Zomboy looked like Karl Pilkington from the series “An Idiot Abroad,” with an immediate chuckle from Luke after we both realised we thought the same! That was a right laugh, with all the MC’s letting out rhythmic poetry, pure jungalist style! A DJ on a set with an MC toastin’ heavy syncopated flows. 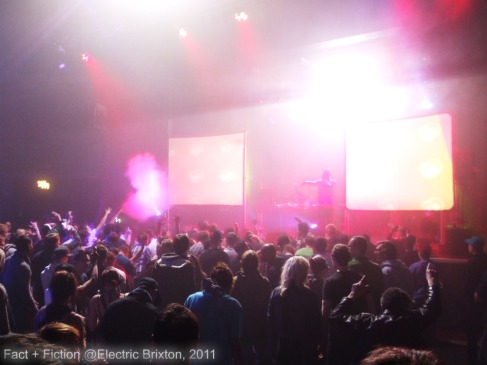 Flux pavilion played Superbad, Lines In The Wax, Bass Cannon with the same awesome reaction from the crowd, my head bouncing to the bass. The modulated chords were played, with Doctor P, playing his remix of the Tetris theme alongside other tracks. Funtcase smashed the place playing dark and twisted basslines, syncopated grooves to minor melodies and chords giving a deep atmosphere to the set, constantly changing and evolving the sounds in the mix. Skism tore the place down with his set, played a few remixes and original tracks such as Power, Elixir and Jump Back ft the Foreign Beggars. The foreign Beggars did a live performance of that track in their set too so it was great!
Dodge and Fuski, the last set on the night, or early morning should I say. Their set had the most bass and made the whole place resonate on a subsonic level, the levels were loud and pounding, even my pint was swooshing around! They played a Caspa’s remix of the track Hangover, the energetic madness with the “Ba ba ba baba baba” vocals mixed in with ragga led bass was cannot be described, I just loved it! Lol
The two DJ’s that were unnamed after Dodge and Fuski played a mix of garage, ragga, Drum and bass, Jungle and more mixing to a bouncy and rhythmic flow. A nice way to end at 6am with a set equal to the ones before. The event was deffo a success with alot of inspiration and militant vibes throughout every set alongside live performances from MC’s and the Foreign Beggars, Respect!!